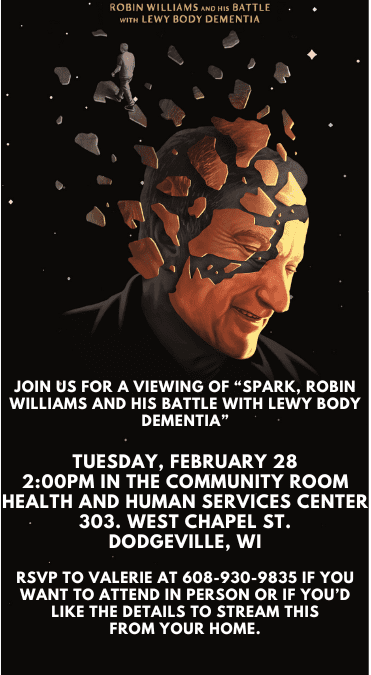 Dodgeville, WI  The Aging and Disability Resource Center of SW Wisconsin is hosting a special virtual viewing of the film SPARK for their Lewy body dementia (LBD) community on February 28, 2023 at 2pm at the Community Room in the Health and Human Services Center.

Thanks to support from Acadia Pharmaceuticals Inc, the Lewy Body Dementia Association (LBDA) and the producers of Robin’s Wish created a 45-minute documentary for educational purposes titled SPARK: Robin Williams and his Battle with Lewy Body Dementia This fascinating adaptation delves deeper into the disease, its biology, myriad of clinical symptoms and its impact on both the person with LBD and the primary caregiver.

Exclusive Launch Just for Research Centers of Excellence (RCOE) On October 29, 2020, LBDA hosted a limited “by invitation only” event for its 26 Research Centers of Excellence. The event featured keynote presenters and exciting guest panelists, including Robin Williams’ widow Susan Schneider Williams, who joined the Q & A session via video session streamed by IBM Watson Media, who generously donated their streaming platform for the launch.

Success of SPARK Launch Over 170 healthcare professionals representing 50 different organizations participated in the 2-hour long daytime event. Participant enthusiasm was compelling, demonstrating how SPARK can play a significant role in providing more education in this area. One viewer stated, “SPARK was captivating and didn’t shy away from tough concepts.” Another stated, “The film humanizes LBD with the personal story and reinforces the importance of getting an accurate diagnosis.”

One viewer accurately summarized the film by saying “I really enjoyed the film. Robin was loved the world over and this really does offer the world an explanation as to how much he struggled with LBD and the disease progression, even without, or especially without having a diagnosis. It demonstrates how the disease can happen to anybody, how easily it can be undiagnosed – even with all of Robin and Susan’s resources to expert care. Although LBD is the 3rd common form of dementia, very few know about it. The film is so well done, and because of Robin, it is a wonderful opportunity to not only educate families, but also educate and engage the public and the medical community.”

The film has been used to promote community awareness, education, and to support those affected by Lewy body dementia. Be on the lookout for more opportunities to view SPARK as a part of educational line-ups for healthcare professionals and for the LBD community since 2021.

For more information about this SPARK event, contact Bonnie Beam-Stratz at bbeam@gchsd.org or Valerie at 608-930-9835

For more information about SPARK contact Miriam Giles at mgiles@lbda.org or Todd Graham at tgraham@lbda.org.

Talk with a friendly professional toll-free: